It was a crisp friendly day down near the Potomac River in Washington DC – the day of President Barack Obama’s Inauguration for his second term in Office. People gathered to pay tribute to Martin Luther King, Jr., a man whose nationally celebrated holiday is also today. The sun was clear, the sky was blue and Memorial Bridge along with Independence Avenue were both closed to general through-traffic. 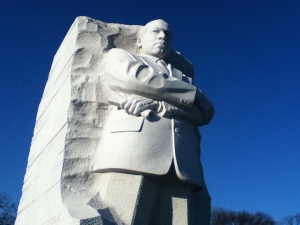 One can certainly see the array of visitors and the inviting weather. 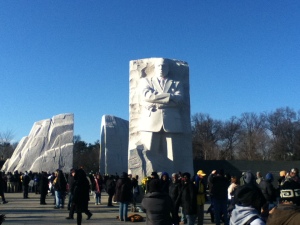 The memorial features several informative elements – more than just a work of public art and tribute. There are also several quotes from his writings and speeches. Below are a few snapshots from the surrounding wall around the statue. 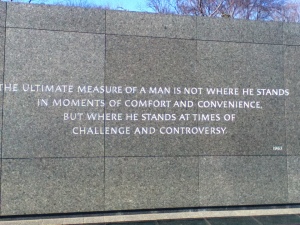 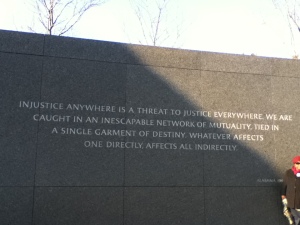 “Injustice anywhere is a threat to justice everywhere. We are caught in an inescapable network of mutuality, tied in a single garment of destiny. Whatever affects one directly, affects all indirectly” – Alabama, 1963 (Letter From a Birmingham Jail).

This trip began and ended on my bicycle – I planned an arc to the journey. I left Northern Virginia and went to the Pro Shop, a full-service bicycle shop in Georgetown.

I needed some brass nipples in order to build a new wheel set for a planned commuter bike – only one part of several projects underway. I got the components (Thumbs up the Pro Shop) and then headed around the city along the river on the Mt Vernon Trail to the Memorial Bridge. It was closed to traffic and was enjoyed by groups of happy pedestrians and mall visitors – many walking four or five abreast. Thanks to the National Park Service for doing this. Independence Avenue was also closed to through-traffic – an arrangement which made it easy for visitors and walkers to enjoy the full spectacle of memorials in the area of the National Mall. I crossed the bridge and sped along Independence Ave on my fixed-gear to the Martin Luther King Jr. Memorial. There I was met by hundreds of fellow Americans enjoying the same thing (though most without bicycles ;)). The route of connected trails allows travelers who use bicycles to cross the Potomac River in many key points – both sides of the Key Bridge in Georgetown, both sides of the Memorial Bridge at the Abraham Lincoln Memorial and over I-395 at 14th Street. These access points to the District all connect to the Mt. Vernon Trail – which runs along the Virginia side of the river. But for those in the District, there is also a network of trails (though more akin to wide sidewalks) that run along the river. The area is well connected by path/trail for use by bicycles.

It was a multifaceted journey on my bike that brought together history, tribute, sights of the National Mall and bicycling.

Did anyone else ride their bikes to the Martin Luther King Jr. Memorial on his holiday? If so, how was your trip?

All pictures above were taken by JL.

Lover of Jesus Christ, IT Professional, systems tinkerer, & amateur on 12-string guitar. I like to learn. View all posts by JL

phantomlandscapes.com & its content © 2011-2022 Jesse A Lambertson (except where hopefully attributed). All rights reserved.